School started last week and it was met with loads of craziness!

Getting used to schedule changes, new faces and new routines.  My little boy started kindergarten this year, which is so exciting (and stressful).  In each little kindergartner that has come through the door this year, I can't help but imagine my own little boy.  The nervousness, the excitement, and the structure.

In the next month lots of new beautiful work to be posted.  The kiddos started creating today and there are going to pictures of their work.  Second graders created some fun pictures working with space, first graders created beautiful fish with different types of line, which served as a review, and the fourth graders are learning about Frank Stella and his connection to North Carolina.

So that is about it in a nutshell.  Third is going over procedures and kindergarten are walking in for the first time.  Stay tuned for pictures and updates on what lessons we are working on.
Posted by Mrs. Parks at 6:00 PM No comments:

I decided to take a different direction with a theme I have done for years.  I love teaching third graders about Ancient Egyptian artwork.  I have done all kinds of things.  Masks, jewelry and pyramids made of sand.  All these different approaches and big units.  They took a while.  I have used the Smart Board to create a backdrop for the students to learn photography skills.  This year, I reworked it to fit this school.
One thing I thought would be cool is to do the lesson about Aztec warriors featured on Deep Space Sparkle.  I have a large Hispanic population here and I thought they would be interested in artwork that originated in an area that would have been significant to them.  I used this lesson and an Egyptian lesson to compare art from to historically significant cultures.
This lesson has been really fast paced and used some standards that I previously had not done a great job in teaching.  The comparison part is coming at the end.  We are just creating the figures right now.  These are the some of the Aztec warriors. 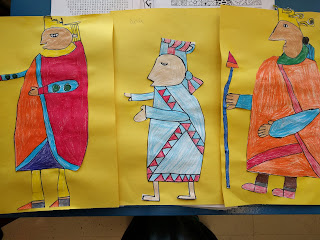 Aren't they fantastic.  Plus, kids love anything they can draw a spear or shield.

We are working on Egyptian profile images with a big focus on the headdress.  The kids are enjoying it and we can then compare differences in the artwork using stuff like Venn Diagrams or other charts or graphs (the stuff that shows data).
Posted by Mrs. Parks at 9:29 AM No comments:

Today is a district Early Dismissal Day, which means the kids leave early (a couple of hours) and they send teachers here, there and everywhere for meetings.  Often times, if there is no scheduled art meeting for all of the county teachers, we have to sit in staff development meetings with the classroom teachers at our schools.
Today, however, is the kind of day where the heavens open up and shine down on little art teachers like me!  I was told our county meeting was canceled.  OK-bummer.  So I asked out principal what was going on and let her know the meeting was canceled.  She smiled and said teachers were getting to work in their classrooms and get grades in.  HOORAY!  Two hours to sit in a quiet classroom, restock materials, enter grades and make lesson plans for the next few weeks.

It is like when your husband takes the kiddo out for the day and you get to clean house and watch Fixer Upper marathons while you fold clothes.  You are still getting work done but without sweet boy wanting to play trains and watch Curious George.


The weather is so nice-I might just write my plans outside today.
Posted by Mrs. Parks at 6:15 AM 2 comments:

Set up and ready!  The art show is up for 2 weeks and comes down on the 19th.  These fantastic artists should be very proud of the awesome work on display! 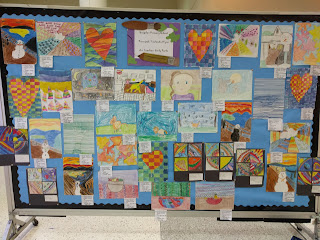 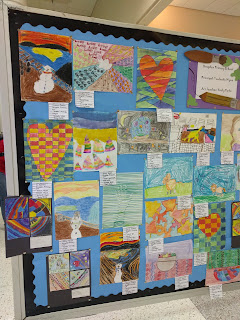 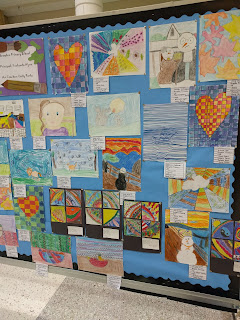 ASW and how it changed me

I hate the idea of trying to make art fit into a mold of testing students.  I hate the scary number of steps that it has added to my already busy workload.  The pre-assessing and then post-assessing as if I wasn't busy enough just trying to handle projects and assignments for 900 kids and put up shows and so on.....
What I hate is the hoops.  The hoops we have to jump through, for people we have never met, to prove that we are great.  Sometimes I feel like there is a man behind the curtain that is surprised when we show them the results and that we made it out alive.  (If you had a mental picture of Dorothy and the gang showing back up with the witch's broom, then you and I are on the same wavelength.)

Anyway, what I learned from this experience is how to collect information and data and ways to use it.  It has genuinely changed some parts of my teaching.  I have assessed what students know prior to teaching a new topic and then assessed again to determine if anything stuck.  I have incorporated a lot more writing into the class and while that can be somewhat painful, it is beneficial.  The best part, however, is showing them what they learned.  I took the preliminary drawings my fourth graders had done of lighthouses and held them up while they were in the process of working on their drawing of lighthouses.  The second drawing was one they learned about one point perspective, learned to draw the lighthouse as a cylinder and not a flat rectangle and the results were amazing.  I had them reflect a moment on their progress.  I showed them how far they had come in just a couple of weeks.  And for some, that struggle in all other aspects of school, for a bright, shining moment they had accomplished something great and someone was proud of them.  They were proud of themselves.
Taking that moment toward the end of class lit a fire in some.  They did not want to stop.  They became the kids that wanted to continue getting praise.  I felt like it was a turning point for some.  And for me.  I had reached them!  At  the end of class they were commenting how much they loved art and were so sad they were going to the middle school next year and would not be here with me next year.
So how was I changed?  Students need to see their progress in art as much as math.  They need to know that they grew and learned something from me as much as any other class.  It keeps them interested and makes them long to do more.  This was not something I thought too much about before.  I just knew kids did not know it before, I teach it, now they know.  Now I guess I know better.
This is the picture of one of my fourth grader's lighthouse drawings.  You can see why they were so excited! 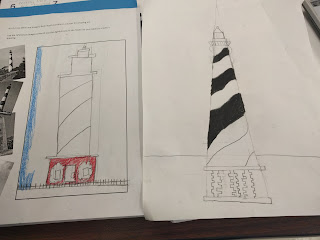 This week in art we have been working on lots of different projects.  I have been so busy with things that I had not reflected until last night about what was I needing to improve.  I realized I was not asking my students any exit questions while they were in line.  You know, ticket out the door type questions.  I was so busy trying to prep for the next class that I had not even asked questions about the lesson or what stuck with anyone.  Will do better today!
Fourth grade is starting the lighthouse project.  I did a one day pre-assessment drawing to figure out where students were in their understanding of how a lighthouse was rendered.  It is fun to see what they come up with.  I finish the class time with a short history lesson on the lighthouses in North Carolina.  Next week they are going to begin drawing a lighthouse of their choice.
Third graders have the dreadful task of writing about art.  The objective to describe a painting is no easy undertaking for some.  I decided we would break it down into 3 class periods.  One day of pre-assessment, one day of instruction and discussion and a final day of assessing what they learned.  I compare the two different writings and see if they are now using art vocabulary and describing the paintings for accurately.
Second graders have created a mosaic style painting that uses warm and cool colors.  This lesson is also one I am breaking down into more class sessions so they won't rush and they understand the concepts and objectives better.
First graders are working on learning to classify art in terms of landscape, cityscape, seascape, portrait and still life.  We have spent the last couple of weeks creating cityscapes with construction paper and this week are loosening up and painting seascapes.  I show them examples, we talk about what you would see at the beach or if they were on a boat, and we listen to the ocean/ waves while we paint.  So far, so good.
Finally, kindergartners are doing the old shaving cream/ glue mixture and creating polar bears.  We paint the mix on with popscicle sticks and fingers and let it dry.  They are learning how the white fur covers up black skin, which works with the white shaving cream and black construction paper.

I completed this lesson yesterday with my kindergartners.  They painted the background the week before, which was difficult to explain to 5 year olds that they were not painting a picture, just painting the paper.  Anyway, we survived that step.  This week we are working on some different skills with collage.  Paper tearing (this again completes boggles their mind-"you mean tear it, on purpose"), and cutting shapes.  The steps are established but there is nothing cookie cutter about it-which I love!  The penguins are all different sizes.  They are all unique and super cute. 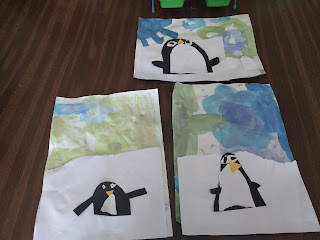 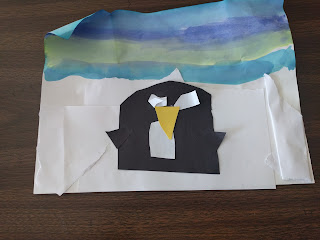 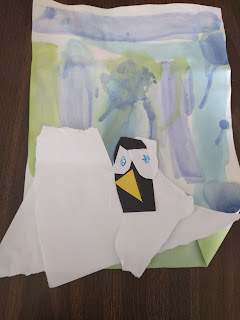 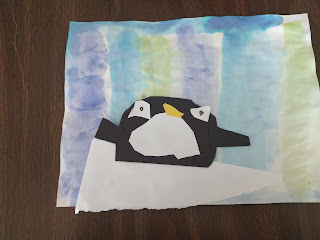 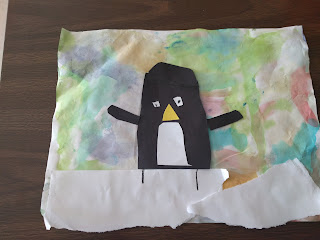 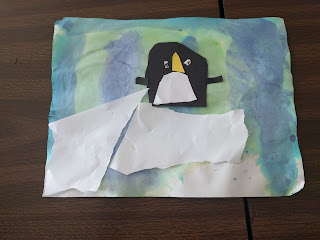 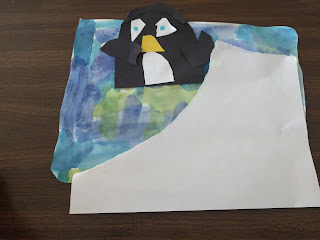 On a teacher note, I am having trouble moving away from glue sticks with them.  I have a love/ hate relationship with them.  I am sure most can relate.  They are easy, slightly less messy but they run out so quickly!   I feel like some days all I do is replace glue sticks.  I need to just suck it up and embrace the mess that the Elmers is going to bring.  We will all be better for it later.
Posted by Mrs. Parks at 5:59 AM No comments:

Mrs. Parks
I have been teaching since 2004 in North Carolina. I have been married to a wonderful man for 11 years and we have a wonderful little boy. We have a dog named Pig and are living a very blessed life! Teaching art has to be the best job on the planet! I teach in a K-5 school with about 1000 kids. I love drawing, especially with charcoal and pastels. Any lessons or ideas you find on this site, feel free to use them in your classroom.